Type in English & Get Text Converted in Bengali

Tips and Tricks for Typing in Bengali

Type in English and Get Tamil Text: Simply put any english text inside the curly Box above in English. After typing the word / line, press enter and see the magical tool by Hindi Typing in Action. You can copy the text in Bengali Language or simply export the converted text in a TXT file.

Bengali Language, also known by its endonym Bangla, has more than 230 Million native speakers and more than 37 Million people use this language as their secondary Language. This Language is an Indo-Aryan Language predominantly used in India and Bangladesh. This is an official language of Bangladesh. 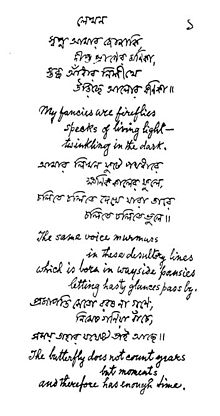 This is an specimen of handwritten bengali script. It is part of a Bengali Poem and its English Translation.

The phonemic inventory of Bengali Language consists of around 29 consonants and 7 vowels, also 7 nasalised vowels. If we talk about writing style in Bengali Script, it is an abugida, which means it is a script with letters for consonants, diacritics for vowels and inherent vowels are assumed as consonants if it is not marked as vowels. Bengali characters are used across Bangladesh and Some Bengal Region of India. Various magazines are published in this Language. Thus, typing in bengali is very important skill to have. However, learning to type in bengali can be a challenge. We at HindiTyping, try to solve the problem where our tool can be used to convert your english text into Bengali Script.

Furthermore, if you are looking for typing tool in hindi, you can visit Hindi Typing Page. Hindi is a popular language in India which is understood by almost everyone in India. Typing in Hindi becomes essential while applying for government jobs as well. Many Authorities and offices only accept letters and applications in Hindi Langugage. Furthermore, Typing in Hindi can enhance the information audience as more people can read and understand your blog or article.